The base of the Cardano Blockchain is the operation of currently more than 2800 stakepools, which ensure the decentralisation and security of the Blockchain.

Based on this, it was calculated which CO2 emissions are generated and through which measures these can be offset. Remarks for a better understanding and  sources behind the calculations are attached.

Result: Approximately 218,000 trees are needed to make the Cardano Blockchain climate neutral with regard to the emissions of  2,700 t CO2 from the stakepool operation.

The pools of the Climate Neutral Blockchain Group are committed to achieving this goal, donating parts of their pool owner rewards for compensation measures and forming networks to make Cardano an environmental friendly blockchain – as a sustainable technology for the future of mankind. 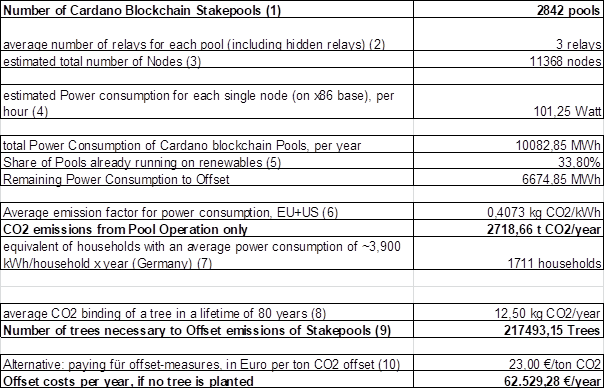 This analysis is based on the determination of the directly generated emissions (Scope 2). Strictly speaking, a complete Scope 2 analysis would still require the inclusion of the direct energy expenditures of developers and organisations of the Cardano Blockchain such as IOG or the Cardano Foundation. Since it is planned to hand over the blockchain completely to the community (project stage „Voltaire“), this simplification is permissible.

The power consumption of applications running on the Cardano Blockchain is also not included. This would be part of more extensive Scope 3 considerations. Since many of the applications currently run on the energy-intensive Ethereum PoW blockchain, it can be assumed that a switch of these applications to the Cardano blockchain will in principle result in a reduction of CO2 emissions compared to the status quo.

(2) The operation of at least two independent (redundant) relays is recommended. In addition to publicly listed relays, which are officially registered, some pool operators have hidden (non-public) relays for security reasons. Their number is undetermined. In order to include them, a total number of 3 relays is assumed for each pool.

(3) The total number of nodes (= block producers and relays) considered for the calculation is 4 for each pool (3 relays, 1 block producer).

(4) The power consumption per node depends largely on the hardware used. Exact data on pool-specific hardware is not available, but is currently being collected in surveys by IOHK among pool operators. Our own estimates show the following results (for bare metal servers).

Although there are also computers with very low power consumption in the Cardano network (e.g. based on Raspberry Pi), the maximum power requirement (=101.25 watts per node) is assumed in the further calculations. Data centres (cloud servers) operate at least 30% more energy-optimised than individual servers (https://cloud.google.com/blog/de/topics/nachhaltigkeit/nie-zuvor-waren-rechenzentren-so-energieeffizient ). Since a significant number of relays and nodes run on cloud servers, it can be assumed that with the assumption of a power consumption of 101.25 watts per node there is sufficient safety in the energy considerations.

(5) On the question of how many pools are operated with renewable energy, a survey of pool operators was conducted for the first time by CO2POOL in February 2021. The survey (https://co2pool.com/climate-neutral/) showed a share of 44%, but with only 71 participating pools it was not representative (required: at least 300 pools).

IOHK conducted a survey in April 2021 in which 354 pools participated.  According to this, 33.8% of all participating pools stated that they operate their infrastructure with renewable energy from wind, solar or hydropower (https://input-output.typeform.com/report/ifq5D45Y/8aDT9otbSb2b743L ). Until more precise results from further surveys are available, the calculations are based on the assumption that around one third of the energy comes from renewable sources.

(7) The average annual electricity demand of a household in Germany is 3891 kWh/a according to VDEW, http://www.agenda21-treffpunkt.de/daten/Strom.htm

(8) The binding of CO2 in biomass of trees depends largely on the type of tree, its size and diameter (and thus on its age).  In the course of its life, a tree binds more and more CO2. For the calculations, an average binding of 12.5 kg CO2/year was taken into account. This value results from literature data. For example, it is stated that a beech tree can bind 1 ton of CO2 in an 80-year period (https://www.co2online.de/service/klima-orakel/beitrag/wie-viele-baeume-braucht-es-um-eine-tonne-co2-zu-binden-10658/) .   Other sources speak of a CO2 binding capacity of 10 – 13 t CO2/year on one hectare of forest. (https://www.wald.de/waldwissen/wie-viel-kohlendioxid-co2-speichert-der-wald-bzw-ein-baum/ ), which leads to a similar result.

(9) It is necessary that these trees have a high longevity and are not used e.g. for firewood or fall victim to wild fires. For this reason, it is important to carry out long-term monitoring of the stands. Modern technology such as blockchain can help with this.

(10) There are various services that offer compensation measures for CO2 emissions (e.g. for air travel). At Atmosfair (https://www.atmosfair.de/ ) this service costs about 23 €/t CO2, other services have prices in a similar range (https://www.wiwo.de/unternehmen/dienstleister/co2-kompensation-22-euro-pro-tonne-co2/24278026.html ).